In the midst of the second day of classes here in San Ramon. So far things are going well. There were a few snags in the plan (for example, more than 12 students showed up that hadn't registered properly), but for the most part our class is well on its way.

Here are photos of the "Centro Promocional Cristiano por la Paz y por la Vida," where the class is located: 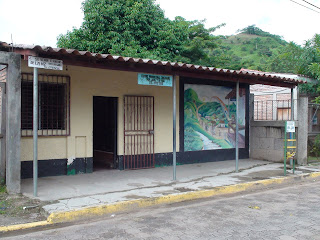 The street it is on (note that most of the unnamed streets here are cobblestoned in the traditional hexagonal shaped bricks called "calzada," very common here in Nicaragua, in fact there are entire highways paved this way): 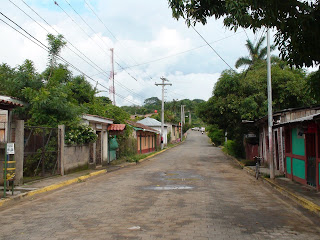 The Centro has arranged to have four classes which each meet twice a week, and since there are four guitars here already (all in working order, just had to change a few strings), we can have up to 12 students per class.

This means I will have approximately 48 students while I am here. I suspect some students will drop out and others will attend. Already I have had students with some experience playing chords and some melodies (the ones who have guitars at home and a parent to teach them), but the majority of the kids are complete beginners.

So far I have students from ages 7 through 18 and they are attentive and respectful to me as their "profesor" (or "profe" as they say it).

Here are some photos of the first class session: 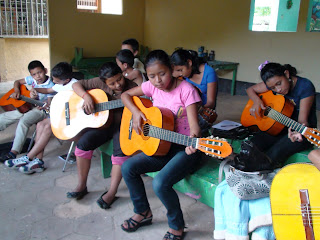 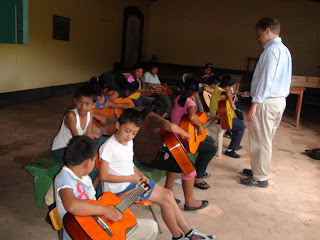 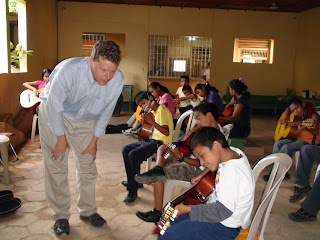 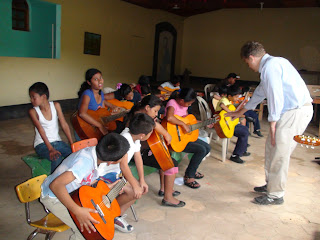 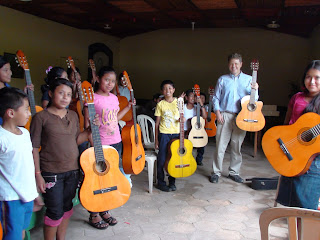 More info and more images to come! ...
Posted by EdwardGrigassy at 2:03 PM No comments:


After having done a very enjoyable workshop for kids in Suchitoto, El Salvador, July 2010, I'm excited to be back in Central America and working with a new group of beginner students.

In July 2011, I went on a tour of projects sponsored by ProNica, a Quaker-based non-profit organization which provides support for several community health, child welfare, peace promotion and education projects all around Nicaragua. It was on this tour that we visited a wonderful community service institution which agreed to host the July 2012 guitar workshop.

The institution that will host the workshop is in San Ramon (near Matagalpa) and they are called "El Centro Promocional Cristiano por la Paz y por la Vida," also known by their earlier, simpler title "Casa de los Ninos." The Casa de los Ninos was originally founded in the 1980's by a group of women as an organization dedicated to improving the health and nutrition of children in the area (in response to high rates of illness and malnutrition). Over the years they have added arts education and women's health promotion to the many free services they offer to the community. 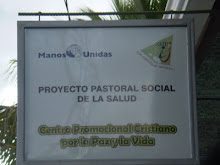 How this July 2012 guitar workshop came about:

I have been to Nicaragua numerous times, spending several weeks here each summer since 2008. I have a special love for the people and the culture here, especially since folkloric music, and more specifically, the nylon-string acoustic guitar is such a large part of the Nicaraguan musical heritage. Nicaragua has a deep and rich history of folk music which makes it a true gem for lovers of folkloric culture, like myself.

During my travels here, I was constantly on the lookout for an established institution that would be favorable for a workshop for children. My intention was to donate guitars and spend some time training new students how to play the guitar. Ideally, I would also get to work with local musician-teachers in order to promote on-going guitar classes to continue throughout the year.

From my experience in El Salvador, I had found that there are several factors that are important when finding an organization to partner with in such an endeavor:

1) The organization should be an established community institution dedicated to promoting education and/or training in the arts for children.

2) The organization must be able to store the instruments that are donated. Especially important is a history of proven reliability with property that has been donated or purchased. Specifically, for guitars, the organization needs a place to keep them under lock-and-key and away from environmental factors like heat, rain, moisture, rust and/or mold.

3) Ideally the organization should have an office that efficiently communicates to parents of potential students about class times and student enrollment. It is also useful if said organization can help deal with any students who are having problems with attendance, discipline and/or focus.

(For example, in El Salvador I unfortunately had to un-enroll one 8-year-old student who was constantly disrupting the class, and seemed to prefer to run around outside than to learn guitar. The administrative staff helped contact the parents and in a very gentle manner kindly asked the parents to have the student re-enroll later, perhaps when he was a little older and better able to maintain focus on the class activities).

4) The directors of the organization should be are enthusiastic about adding guitar training to the services they provide the community. If the administration is excited about the opportunity to expand its musical education services, it helps makes the whole project run smoothly and it makes everything more fun for teacher and student alike.

5) The organization offers it's education services to any families who are interested free of charge. I believe it is important to empower children regardless of family affiliations or income. As you know, a student's economic background has little to no correlation to his/her aptitude for learning an instrument.

The Casa de los Ninos had all of these qualities as well as the highest personal recommendations from ProNica staff (Lillian Hall, director and Carmen Gonzalez, delegation coordinator).

So during our visit to the Casa de los Ninos I met with Rosario Gonzalez, the current director, and she was very interested in the opportunity to have guitar classes for the children of the community. She was also very supportive in having as a volunteer to organize and run this workshop scheduled for July 2012. Over the intervening months, I gathered guitars and prepared for the workshop, which I will start on Monday, July 9.

Obtaining the guitars for the workshop: 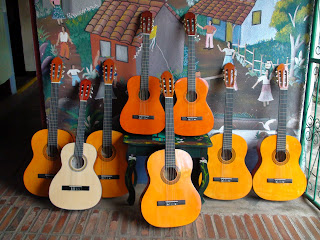 A crucial ingredient in running a workshop (and starting a regular guitar class) is providing the instruments for students to learn on.

In this case (as in the Suchitoto, El Salvador workshop), I simply purchased the guitars myself from a wholesaler in Houston, Texas for approximately $27 per guitar (most were purchased from JSL Imports). These guitars are built in China. (In the future, I hope to further investigate where and how they are constructed, but suffice it to say, they are decent instruments for students to learn on.) These particular instruments have good intonation and come with sturdy cardboard boxes that can serve as storage cases providing a good deal of protection from the elements.

Two years ago, I had the guitars shipped to El Salvador in boxes (there were 21 guitars in that instance) as freight. Unfortunately this wasn't the best method as it was (a) fairly expensive to transport, and (b) the Salvadoran customs administrators refused to treat them as a donation and, according to their policies, charged a hefty customs charge before releasing the instruments to the art center in Suchitoto. (Which the art center fortunately paid... see the blog entries regarding the 2010 workshop:

This year I instead found "delegates" (students traveling to Nicaragua for educational tours) who were willing to carry the instruments one at a time. Each delegate transported one guitar each as a second baggage item for only $40 airline fee. Upon arrival there was no questions asked nor were there any charges levied for the instruments. I was put in contact with these delegates by direct recommendation from ProNica staff. In this case a group of Trinity University (San Antonio) students led by Dr. Meredith McGuire brought down five guitars in this manner. I then brought two more instruments with me as additional baggage. Lastly, today, I purchased one more here in Managua at a local music store (after canvassing all the local guitar dealers for the best deal in 2011).

So for this workshop I am bringing eight new guitars (five full-size and three half-size). The director of the Casa de los Ninos says she already has three instruments that we can use for the classes though I have not seen the condition of these instruments.

I am sure there are better and more inexpensive ways of obtaining instruments (like perhaps purchasing them wholesale locally). For future workshops I will attempt to optimize this process.

Preparing for the workshop:

Thankfully the Suchitoto workshop has prepared me for teaching kids guitar in Spanish and optimizing repertoire that they can master in 2 or 3 weeks. In future posts I will discuss the repertoire and procedures I use to teach these kids. The plan is to have 16 to 20 students per day for 4 days a week, followed by a recital (open to the parents and community) at the conclusion of the workshop. I have asked for students to be selected by interest and aptitude in the age range of 8 to 15 years old.

I intend on teaching notes in the solfege system used throughout Latin America ("Do-re-mi-fa-sol-la-SI-do"). I make use of the ingrained practice of copying into their personal notebooks whatever the teacher writes on the board. In this case I have them write the locations of notes (with note names, strings and fret numbers) and the "text" version of the songs we are learning.

I will teach them several famous melodies, and depending on the time and pace of the class, we may even get to music notation and/or chords.

In future blogs, I will report the on the progress of the class, and I will post photos of the kids with their guitars.

Thanks to everybody who has supported me on this effort and I am excited to be working with this new batch of students!
Posted by EdwardGrigassy at 4:19 PM No comments: